It took longer to type the title than it did for us to be out of the rally, almost.

Since we weren’t able to get our act together for Perce Neige but already had the car prepped – well more than we usually do anyhow – we figured we were in good shape for Lanark. Turns out that was not actually accurate assessment of the situation, which is a theme we decided to go with for the entire weekend.

We had the car running and after getting some replacement EBC Red Stuff brake pads from hslrallysport – two sets, in fact – we replaced those to start. We thought we got our moneys worth out of the last ones so why not. We swapped those in, got a temp sticker, and planned to give the car a run before going to get a clean air test.

If you’re not familiar with Ontario, Canada, this is a test they do every 2 years to make sure your car isn’t emitting too many pollutants. Mostly they do this by hooking a machine up to the OBD2 port and getting readings (which can be spoofed by any kid with a cable and open source software, or so we are told, cough cough) but in the case of cars that are OBD1 like The Manchurian they stick a hose up the tailpipe (note: not a euphemism) and get a reading of particulate and hydrocarbons. There are a bunch of anti-cheat things also like they take a picture of the VIN and the rear license plate and the mileage also. Anyhow, The Manchurian has the catalytic where the muffler should be so they have to be careful with the probe (hey we said not a euphemism). However, the other thing that the car has to do is idle between 400 and 1200 rpm for 1 minute and then be held at 1800-2400 rpm for 2 minutes. Doesn’t sound too hard, right? Well it failed because the idle was loping all over the place and the throttle cable was loose so it was really hard to hold a steady idle at higher rpm. So that was annoying, but at least it was free.

So back to the laptop to try to figure out what the problem was. Sounds like a vacuum leak, right? However we’d already gone through all that and were pretty sure there weren’t any. We did a bunch of digging on the Internet and found that if our base timing was off it might cause the issue. So, find a timing light with a bulb (thanks One Man Team Motorsports) and check it and oh look at that, it’s supposed to be base 5 degrees and it’s somewhere just above 10. Fixing that took 5 seconds and then sure enough it idles properly. Or at least mostly properly; it’s still a bit off and we might still have a leak at the EGR so we’re going to order a block off plate. We also found some important things, like nuts that were missing from engine mount bolts post-Pines. 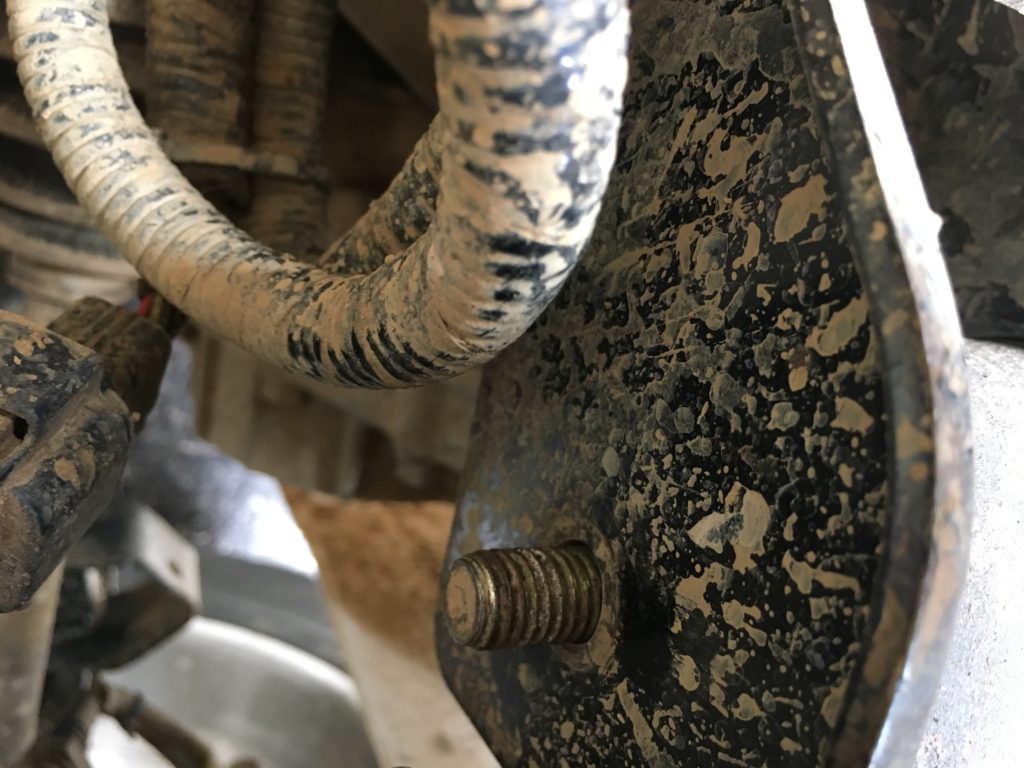 With the idle back working we scrounged some time out of a work day while the temp permit was still good and got it back to the clean air test. Which meant driving it to work. 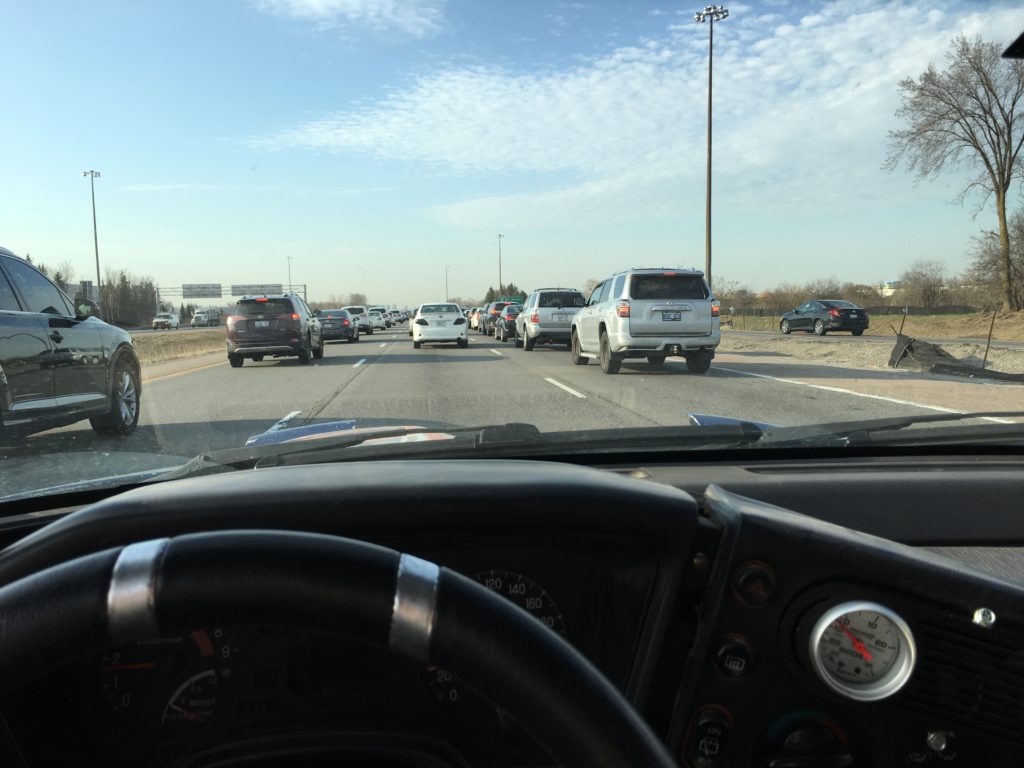 (This might be a digression but if you have never taken a fully caged car without an adjustable seat to be serviced it causes some issues. Just for starters, if the driver is more than 6′ tall and the car is designed for you then people under that can’t reach the pedals…and that’s after they crawled over the cage and into the seat and then back out. Then they want to put an induction measurement tool on the battery so they ask you to pop the hood, which does not pop but latches. Then they want the battery, which is in the rear hatch in a safety container, so they have to use a plug wire. Then they want to put the probe into the muffler and rest it there, but as mentioned that’s a catalytic converter so that won’t work. After a while you get the idea that they wish you wouldn’t come back, which of course we kept doing). However, after all that the damn thing still failed, on both particulate and hydrocarbons. Appears that it is not just running a bit rich – which we could adjust – but that the catalytic is actually not doing much and needs to be replaced. Sigh.

So on to Plan B, which at this point is Standard Operating Procedure for us: get another temp permit to race, come home, get another catalytic, have Ryan cut the clamp off the old one and weld it to the new one, put the new one on and then get the clean air so we can get a proper plate. Which means that on the way to Lanark we stopped in Peterborough at a Service Ontario office – which was a really nice one and totally empty – and got another temp sticker, went to a really strange Starbucks, and finally rolled into Lanark in our rental recce Santa Fe around noon Friday. Well at least after all that things should go smooth, right?

Yeah, no. After that we had some challenges with the notes we already had, which was strange, but the new bits seemed pretty straightforward. (Foreshadowing alert: they weren’t). They also seemed pretty fun, and the crests/jumps on Ranger Road looked like they’d be great with the DMS suspension. At the end of the day we were looking forward to having some dinner and a couple of beers, but before that we had to tie everything down due to the high wind warnings. And as we were doing that we realized that our ‘trunk release’ string had been thrown into the hatch. No problem, just unlock it. Oh yeah the keys are on a ring that is in Schomberg. No problem, just crawl in from the front. Well, some maniac put a roll cage in right behind the seats, so you’d have to be a small child to fit through there. And when we got a small child to try they still couldn’t do it. We tried making a hook and pulling but couldn’t do it, so we had to pull the driver’s seat out and crawl back around the roll cage and two spare tires to get to the damn rope. That took about an hour, all told. 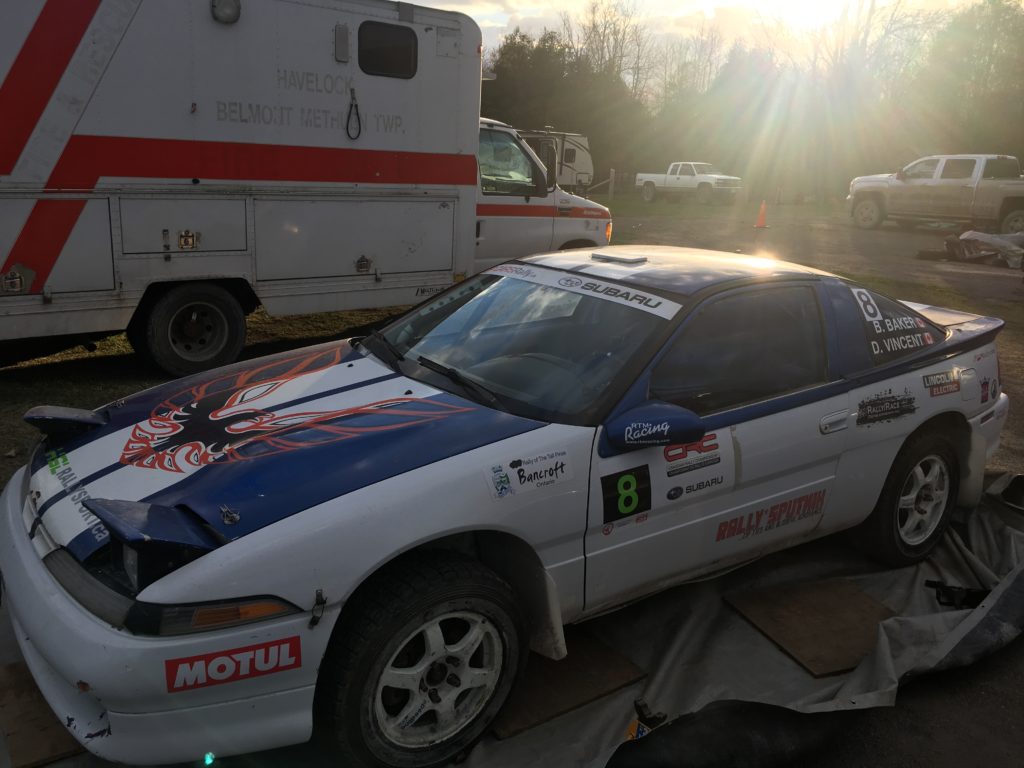 We finally got to the hotel and the wind was coming up pretty strong; when we got back from the pub the road was closed because the pole line was tilting, but at least we still had power.

Woke up to the road still closed but the Tim Hortons still open so at least we had what they call coffee. Also: people make fun of Starbucks customers for having to learn a new language to buy a coffee. Which is fair. However, ordering food at Tim Hortons can be a ridiculously complex process in itself. That said it comes fast, but still, you can tell the pros from the amateurs. 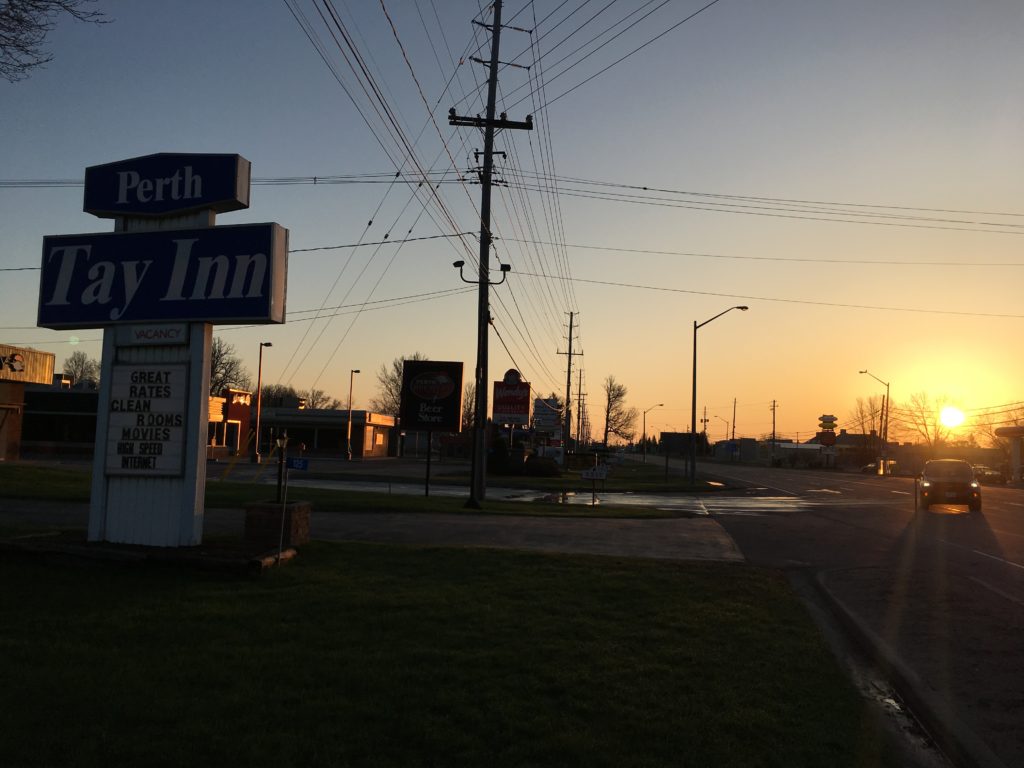 Anyhow, no power at Parc Expose but no big deal and we headed out to our first stage since November. The first 45 seconds or so were pretty good.

Then we hit what we had in our notes as (I think) a crest stay mid right 6. Well that’s what it felt like when we drove it at 55 in the Santa Fe. When we hit it in The Manchurian it was a jump stay right, maybe throw a caution on there. We were in the air when we should have been steering and landed on a clump of Canadian Shield when we should have been avoiding that. We went through the rocks and stopped about 100m down the road with the driver’s side wheel at a 90 degree angle. 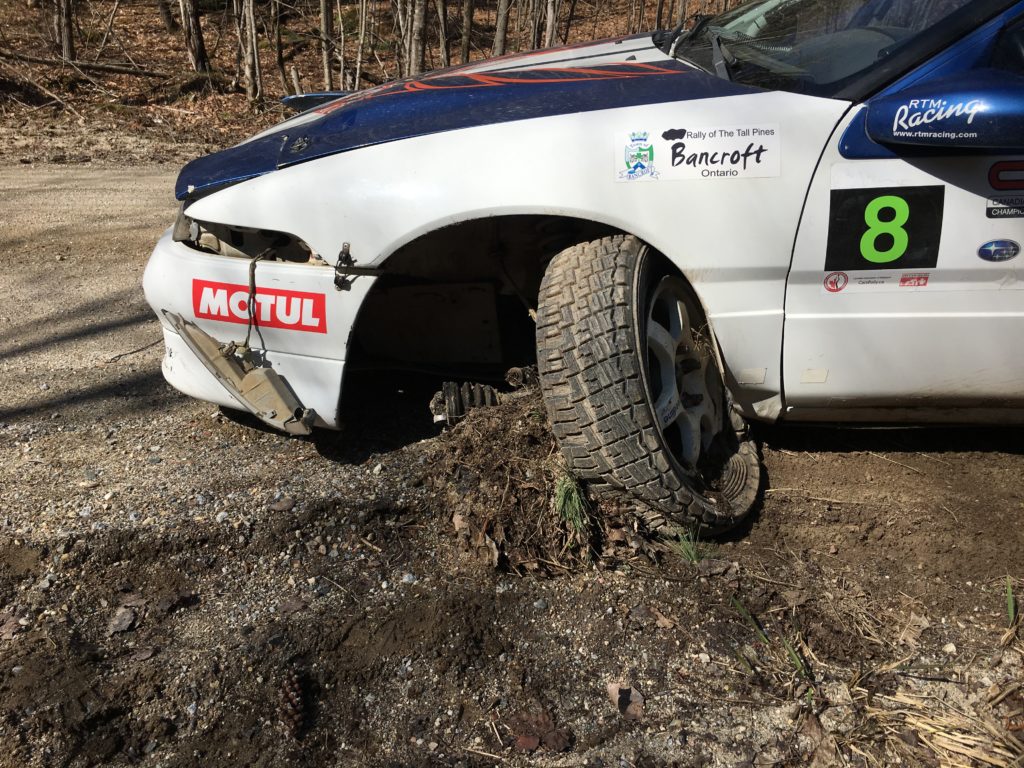 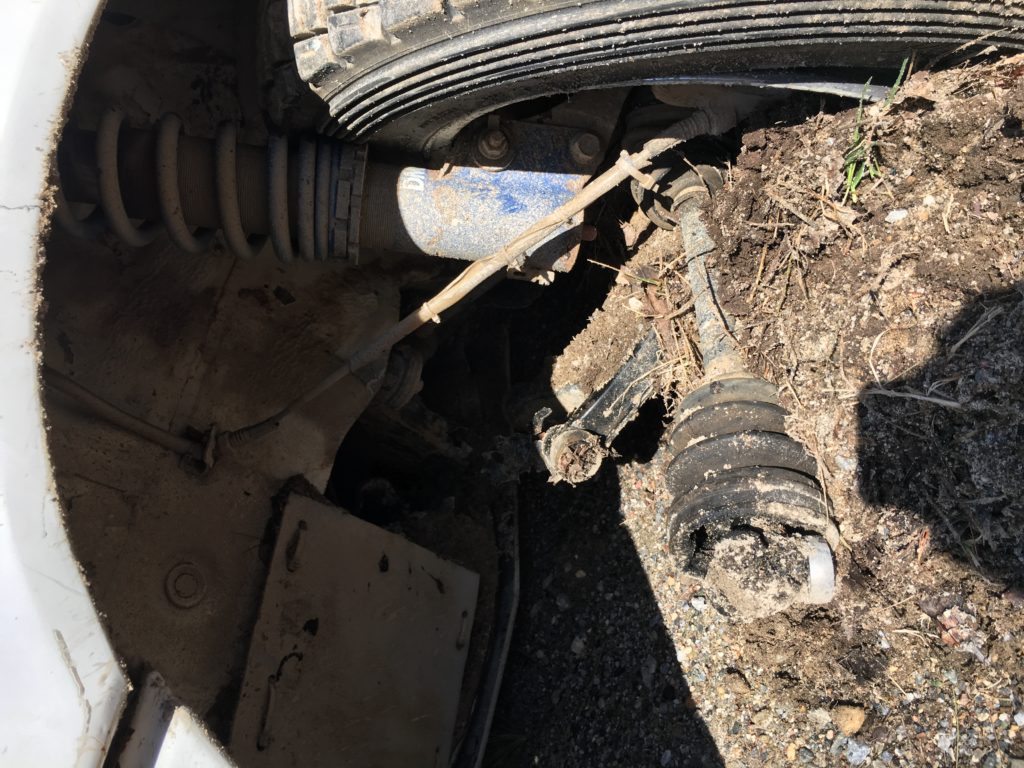 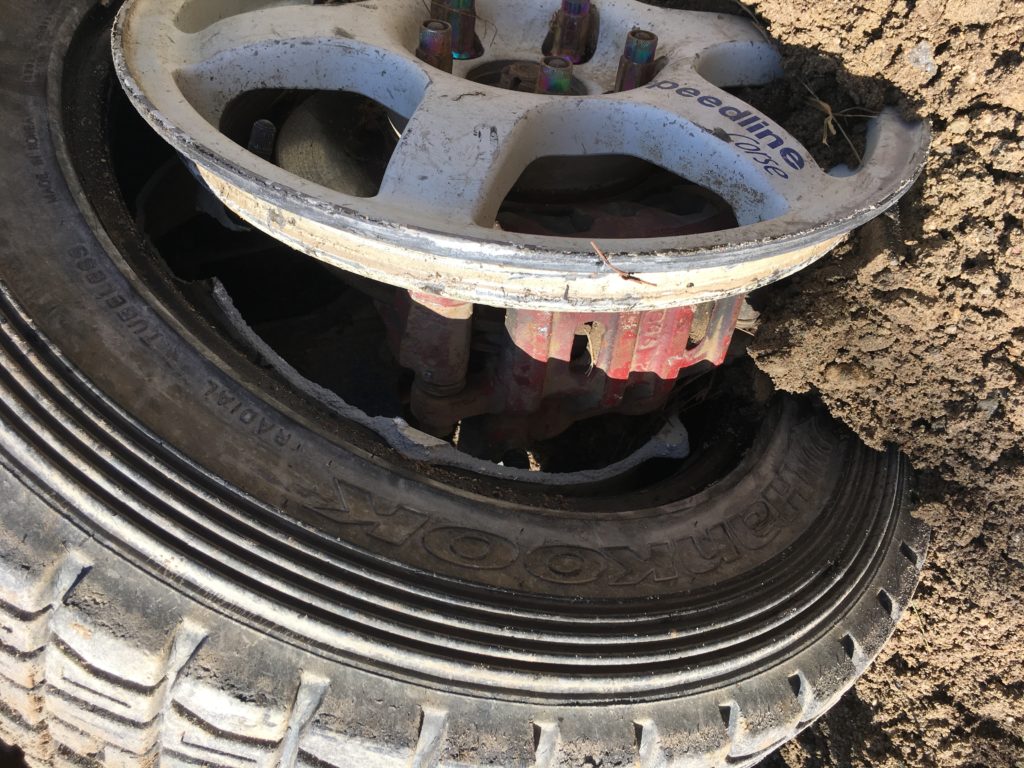 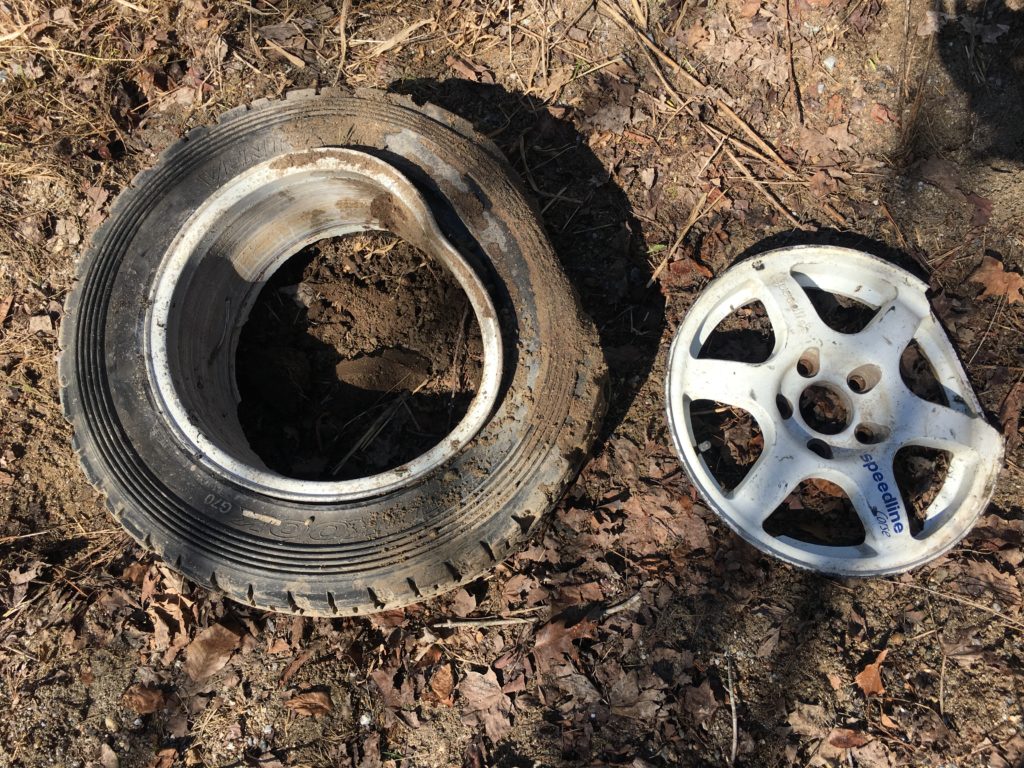 We hopped out and put up a triangle but the next couple of cars – presumably not expecting a triangle in the first goddamn minute – still came in a bit hot so we moved the triangle up further. That gave Derek a great vantage spot to see a fellow competitor do what we did, just slower. They ended up stopping right on the triangle, so add that to the damage. That was the second of four cars to have a challenge with this spot, with Dimitri hitting it with his Evo with the most speed and fully detatching his front left wheel. In this case we did not love the company though.

That’s really all it took. After 1 minute of racing we hit the crest at 110kph, had a second or so of air time (both as measured by the Garmin camera, so hopefully reasonably accurate). That translates to 30-40m without the ability to alter the direction of the car, and that’s where we would have steered. Instead we’re off the road and into whatever is there. In this case, mean old rocks. The key part is we learned something. Yes it’s true. We learned that we need to adjust our notes to the speed we will actually be going, which is – thanks to the engine working properly and the suspension working amazing – much faster than we used to be going. So we need to adjust more. It was an expensive and painful lesson but we think we have indeed learned something. And they said that was impossible.

After the stage closed Ryan came back with the trailer and we threw a spare tire on, ratchet strapped the suspension together, and hand-winched it onto the trailer. Thanks as always to the Sweep team who left us in good shape to get it out of there; we’ll have to stop meeting like this. From there we packed up, drove the 4 hours home, got the Jeep, went up to the shop, and used the winch to pull the Talon off the trailer and onto a jack so we could roll it into its spot, then go home and drown our sorrows. 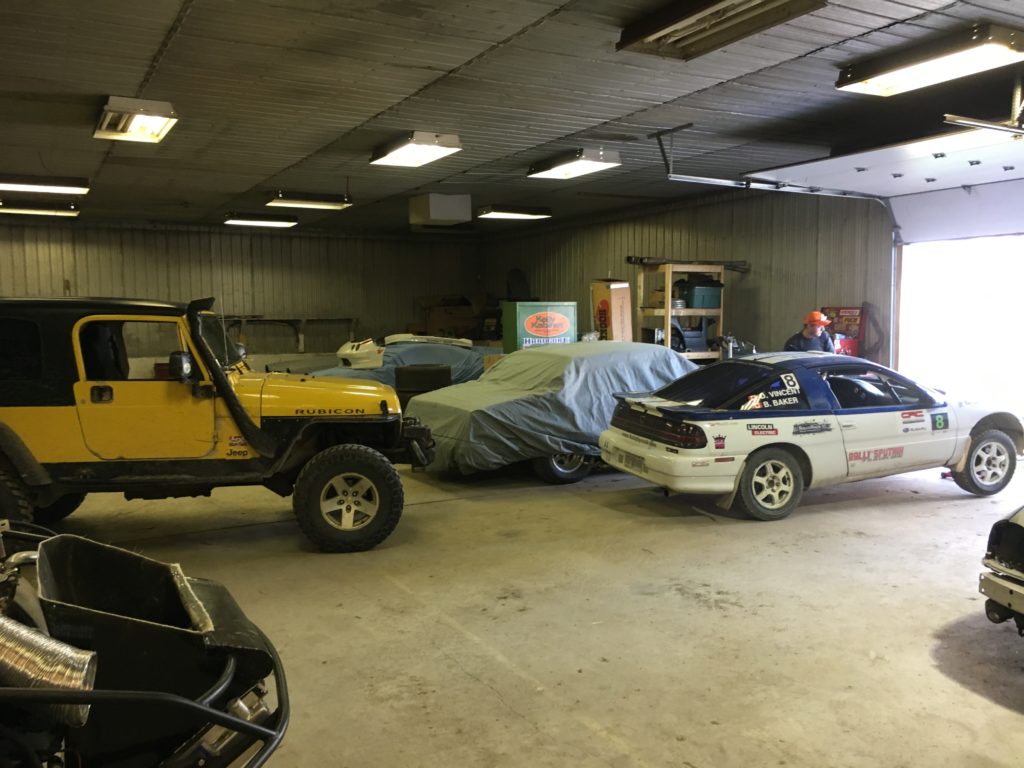 Further investigation – performed while changing the radiator on the Jeep – shows that the lower control arm pulled out of the subframe, so both of those need replacing. The rim, well, it’s going on the trophy wall. The very expensive trophy wall. As has been pointed out before we need to stop breaking rims, and if anybody has any 15″ Mitsubishi bolt pattern rally rims they want to get rid of just let us know, as we’re in the market. More so every rally, apparently. The other issue is we need to get the DMS checked to make sure we didn’t bend anything. Fingers crossed there. 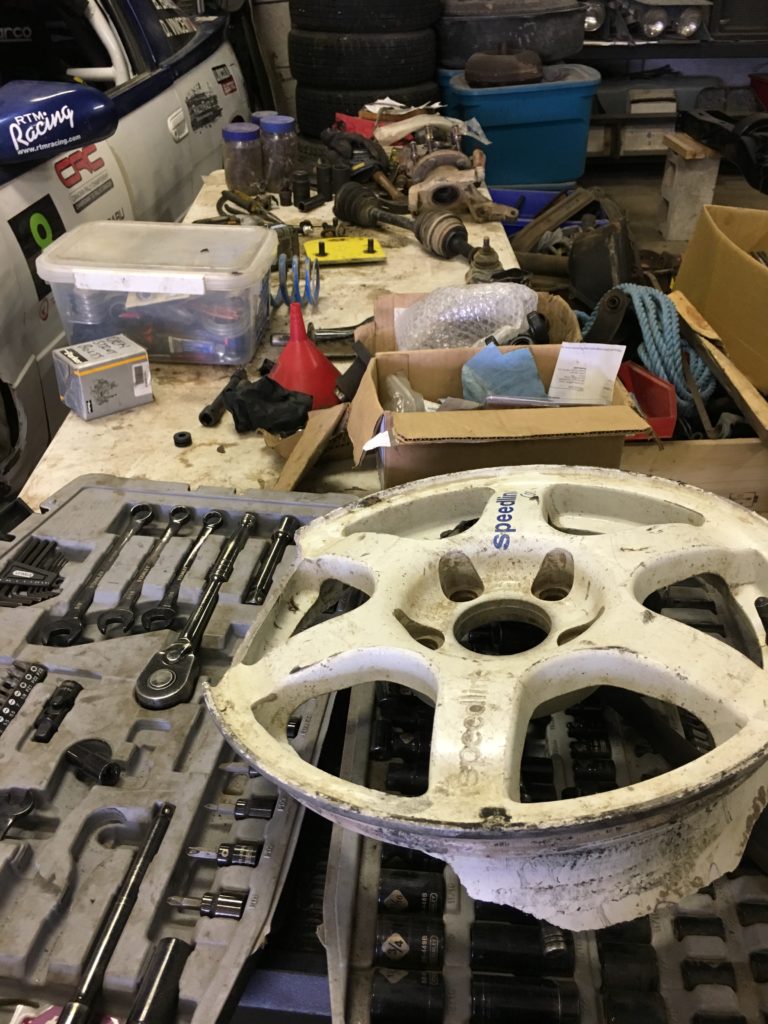 And that’s it for now. We have a line on a subframe around Montreal so hopefully that will work out and we can get it down here, then re and re it. The skid plate is a bit tweaked but again, hopefully we can bend it back into shape so it isn’t a huge pain in the ass. The rest of the damage looks to be bent sheet metal, so who cares about that – we’ll take the hit in the concours. More news as events warrant. 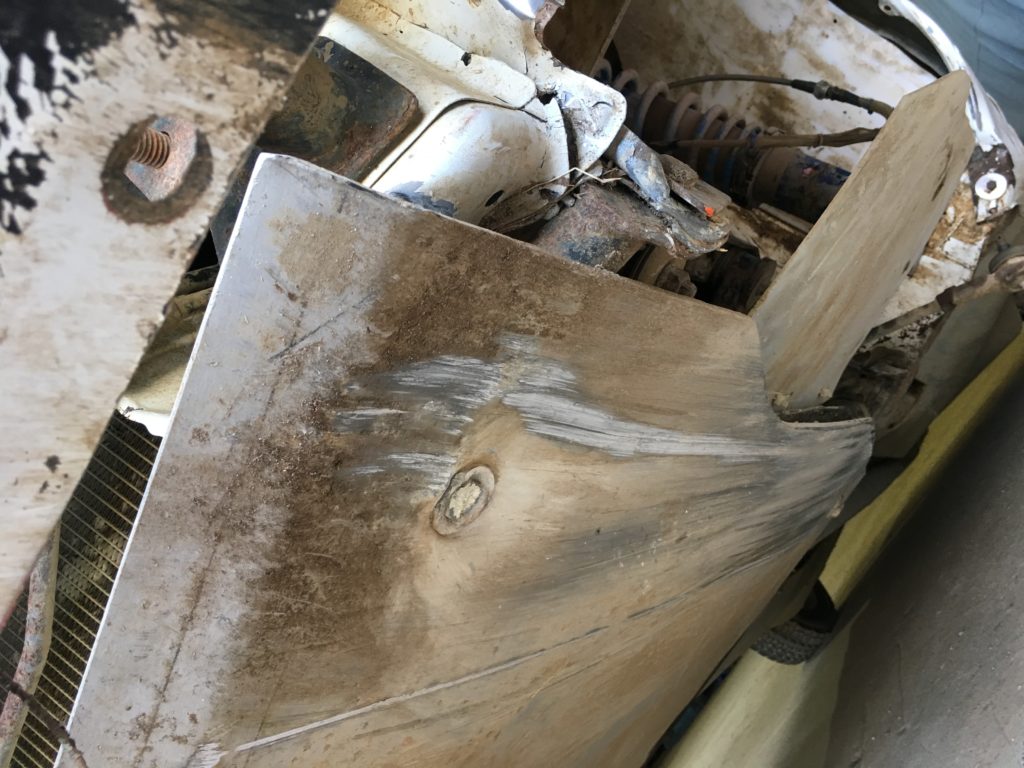 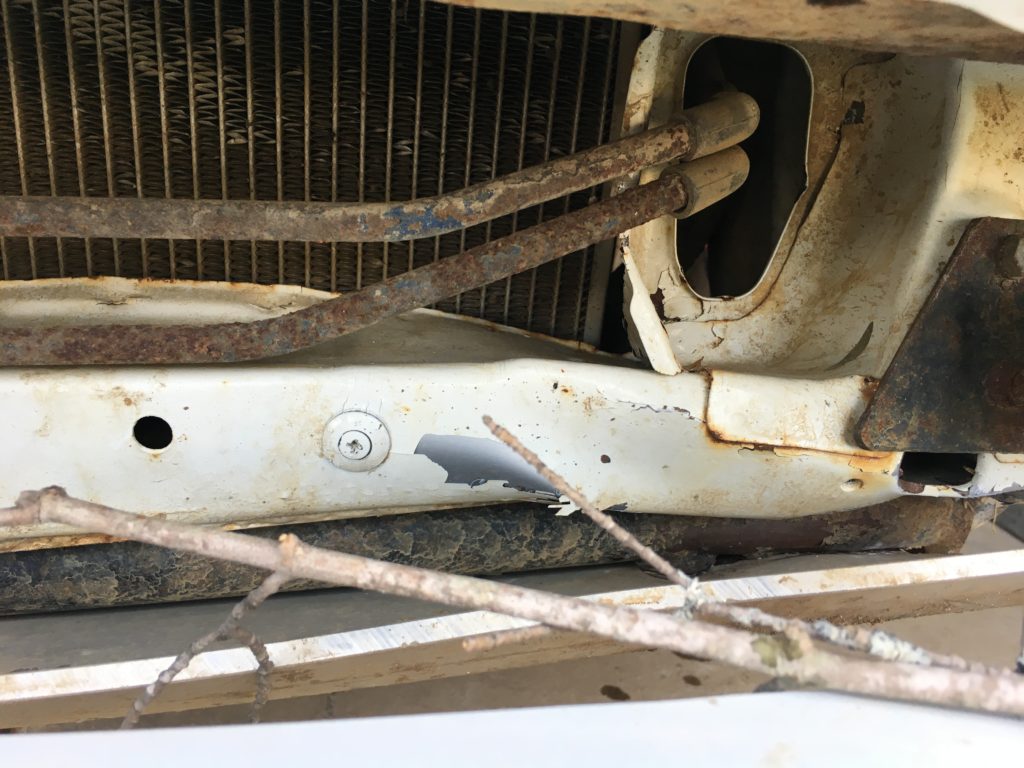 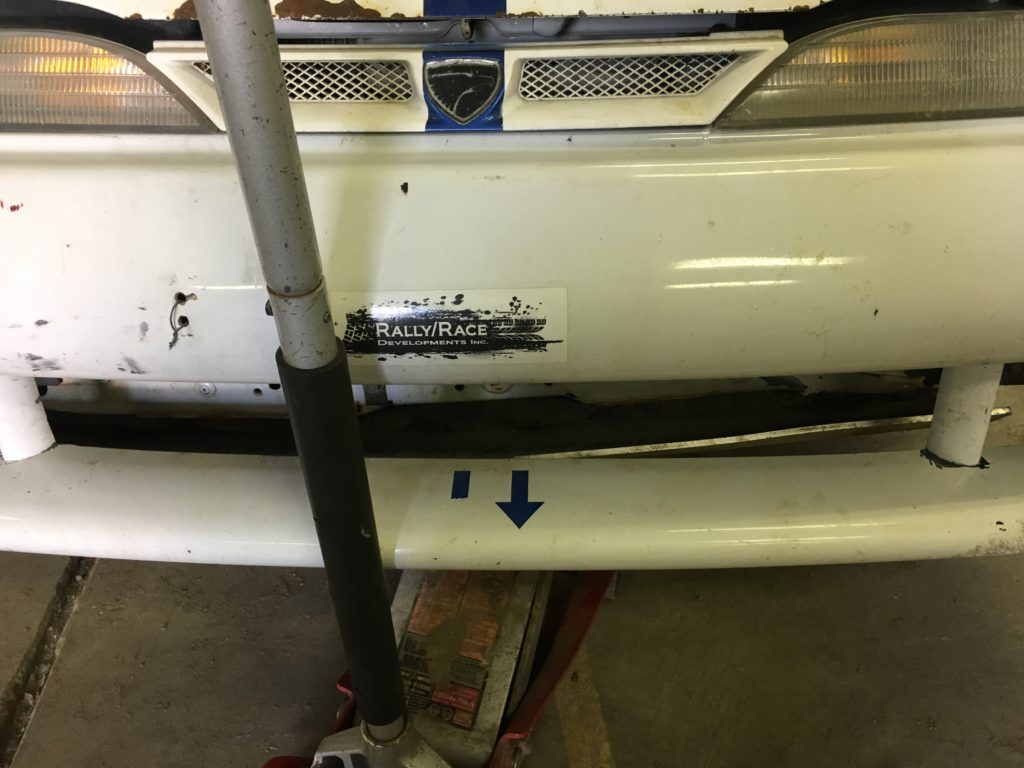 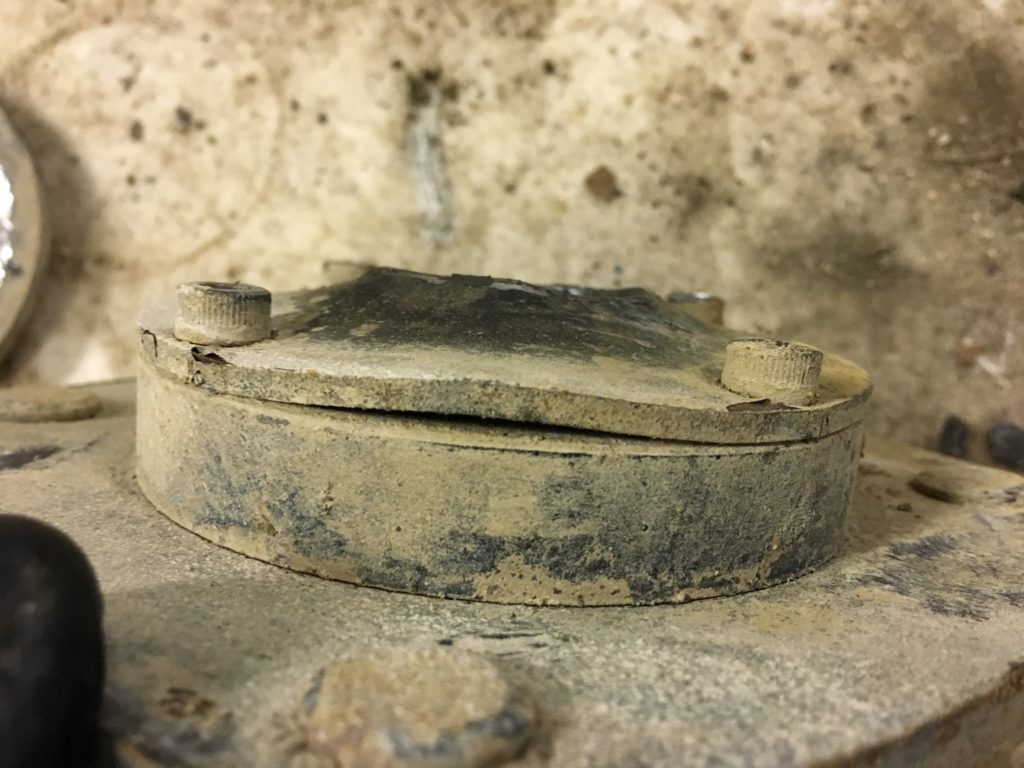 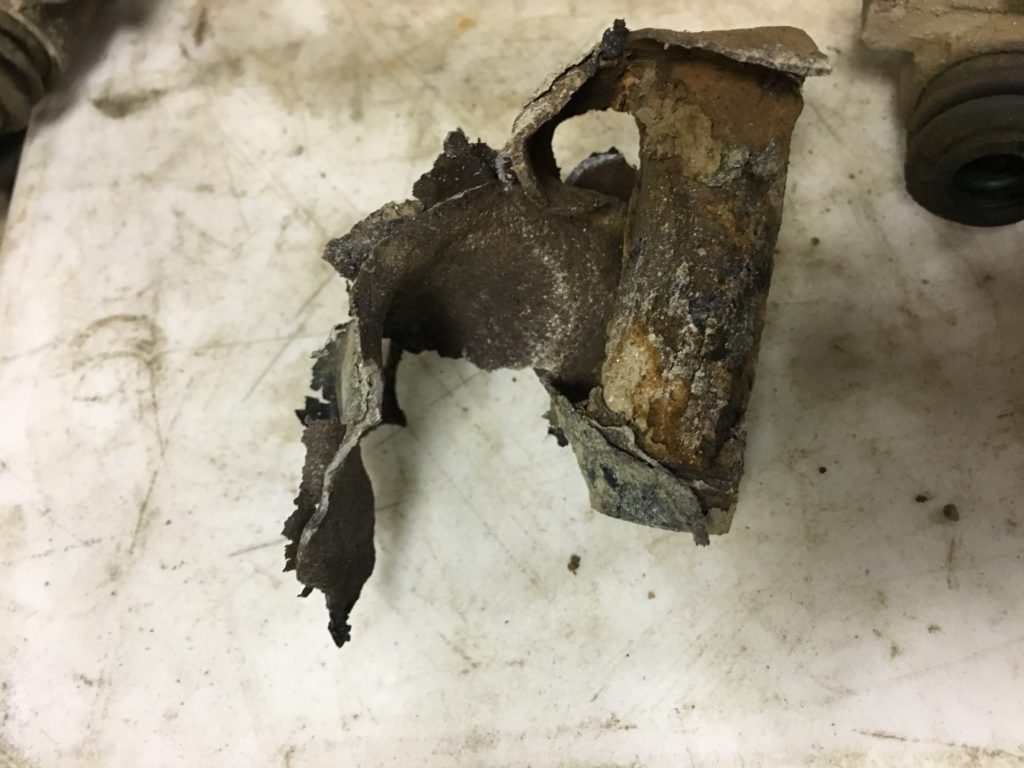 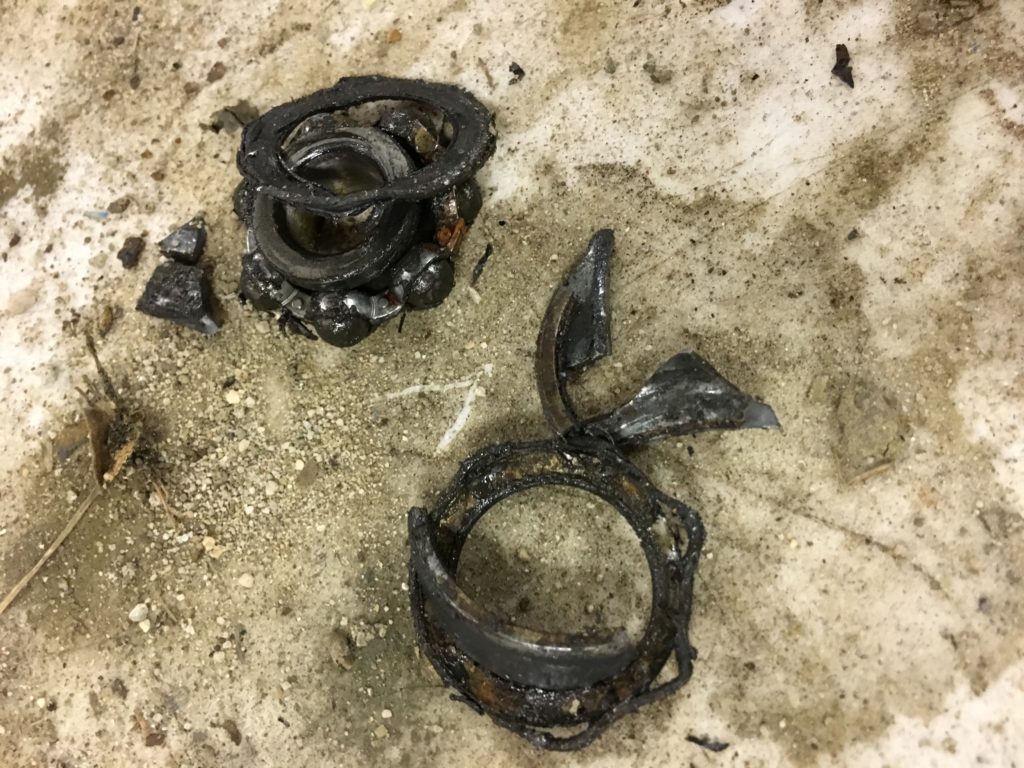 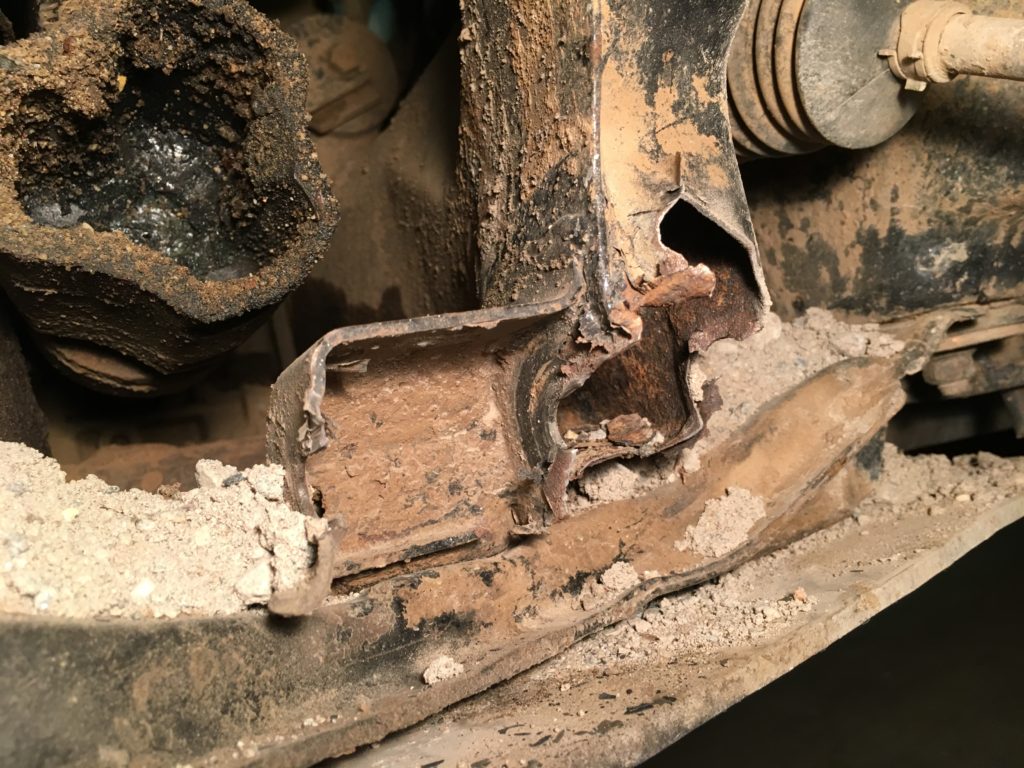