As you may have seen we believed we were ready for this rally far earlier than usual. And you may have seen that our definition of “ready” means ‘if a buddy sends you a text and asks if you need anything for the car while he’s in the next town, then tell him you need a nut, probably imperial, to fit on a 1⁄2 inch diameter motor mount bolt, because the rear motor mount doesn’t have one’. When said buddy brings you SEVERAL nuts, with different thread pitches AND washers AND – AND – all hung together on a zip tie then you know you have a well oiled machine of a team. And a mostly ready car that is even more ready.

And it worked! We drove the car to Rally/Race Developments after Cars and Coffee where Ryan checked it out for any new gross negligence (and put the nut on the bolt after we dropped it off in the mailbox) and then he hauled it up to Lanark on Friday. We drove up in the recce WRX aka Princess and managed to pick up beer, gas, a tire pressure gauge, and fire extinguishers on the way through Perth on Friday before recce. Princess was driving a little odd on the way up; initial thoughts were CV so fingers were crossed it wouldn’t fail out on the stages and we carried on.

Recce seemed to go well but we’d find out the truth of that Saturday… We had decided not to use the provided notes as we did at Pines and instead write our own. We did that with the Lada and those notes were way better for us, so we wanted to get back to it and this was our chance. Said recce was followed by a family type dinner and then the navigator got to listen to the rest of us snore while transcribing notes until almost 2 AM. That meant that 5:30 in the damn morning on Saturday came pretty early, but we all got up for second pass of recce and those of us that drink coffee thanked all that is good we brought the espresso machine. Go go latte power. The second pass of recce was when we realized we still had some issues with the notes and no time to fix them. No problem, we’ll just adapt as we go, right? With that positive (aka misguided) outlook we suited and psyched up.

It’s worth writing down that driving The Manchurian is pretty cool for us. It’s such a big difference from the Lada and we’re still not used to actually having power AND traction. Hell, it’s almost as fast as Princess! Also, children like it. Adults liked the Lada, particularly those who remember Lada’s, but little kids want to sit in the Talon. Like this kid. Because race car! 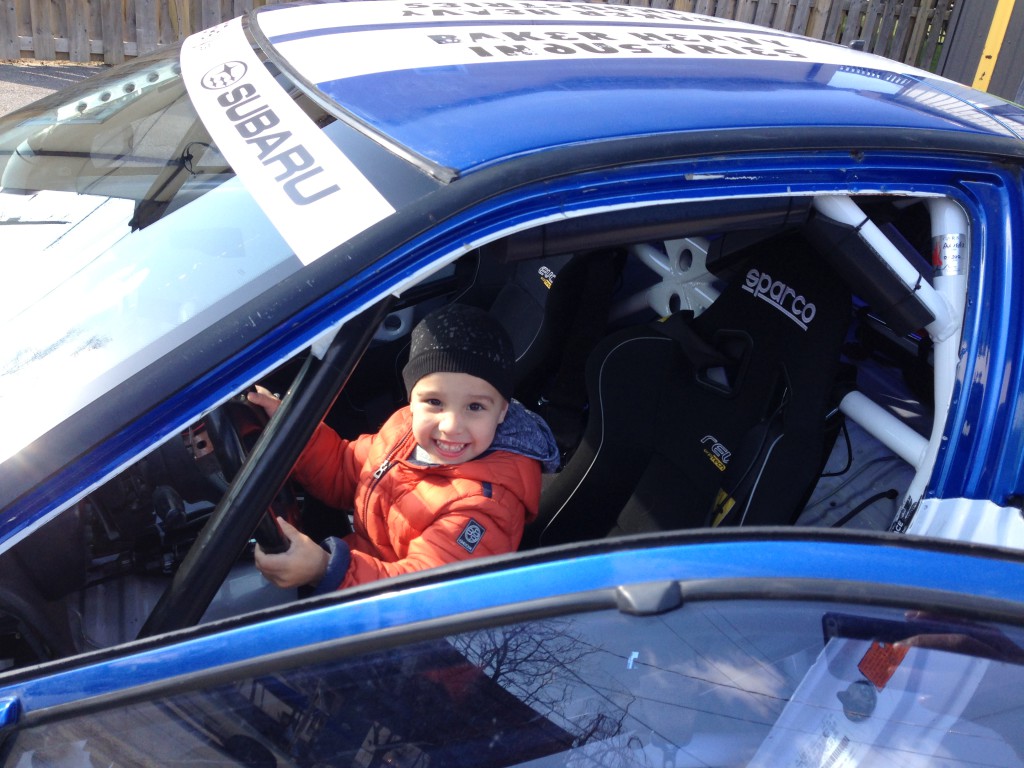 (From Cars and Coffee, but you get the idea).

So our goals for the day were 1) finish our first rally with The Manchurian 2) Top 10 finish 3) Top 5 finish (stretch goal, ok?). After our first pass it became pretty clear that we had some issues with our notes, so #3 got dropped off the list like it was never there. In fact, we have a standard “No confidence” call for when the notes are off and we are driving to line of sight/memory, and we used that call a fair bit in the first 4 stages. However, our times were getting better each pass regardless and it was all pretty fun, although a bit of a hot mess. We came back in for first service with just the rear suspension guards loose and one small excursion into the dirt. It was at least on the co-driver side, which is where everything bad is supposed to happen, so things were not totally out of hand.

The new stage is Umpherson and it’s really short and really fun, and Lavant is just a really solid stage road. We did each of those twice one way, then first service, then each stage twice the other way, another service, then each stage once more. The majority of the dust was on the transits and the sun was not in our eyes – a pleasant surprise – so by the time we came back in for the second service we felt like we were getting the hang of this thing. Our times were not stellar for an AWD turbo car but they were improving each pass and we hadn’t hit anything yet, so could be worse.

We had a final service where we checked the tire pressure, confirmed the leaks were proceeding at the usual speeds (too fast means a problem, too slow means we’re out of something), and went out again. The last two stages we actually got our act together with the notes a bit so there was some actual flow and putting together of instructions in the brain with car position on the road before we got to the corner. When that happens you can feel it in the car and it’s really, really neat.

(As an aside, that is also where significant speed increases can come from. When the notes are good we have a flow we get smoother and go faster, which means good things to stage times. So this is what we will practice).

So after all that we came in 10th, which means we hit 2 of our 3 goals and all of our realistic goals. We’re stoked! The car feels great; really solid, even when we inadvertently had jumps, and it was reliable. (It is doing a bit of under-steering still but we’re working on that). And nobody crashed at all, which is unheard of and also great. So after a good hot day of driving around in the countryside we watched the deserving winners spray champagne and then went to the banquet. Walter Boyce, Doug Woods and Stuart Gray were there also; really nice guys and it was super cool to meet some Canadian rally pioneers. Then we drove back to the cottage (thanks Juggernaut for the reservation) and drank some beer and collapsed in a dusty heap while our service guys, clearly made of heartier stuff, drove home that night.

However, in a surprising show of dedication we went BACK to Umpherson – after breakfast in Lanark – to check our notes out driving slowly and see where we went wrong. Surprisingly few spots, but enough that they compounded to cause us grief. Now that we know what we did wrong we can practice avoiding it next time! And that was followed by a long boring drive home. Oh, and Princess made it! Seems like the issue is a dying center diff but remains to be confirmed by a catastrophic failure. Just give it time…

“Next time” is Galway Cavendish in August, because one of us organizes Black Bear. Everyone should enter that – it’s in July – and we will be there to work but sadly not race. There WILL be a rally sprint on that weekend also, so hopefully some older rally cars will come out of the woodwork and surprise everyone.

Thanks to all the organizers and volunteers. We leave you with some videos of the last two stages. (Hint: the Umpherson one is under 4 minutes if you’re just being polite).

See you at Bear! 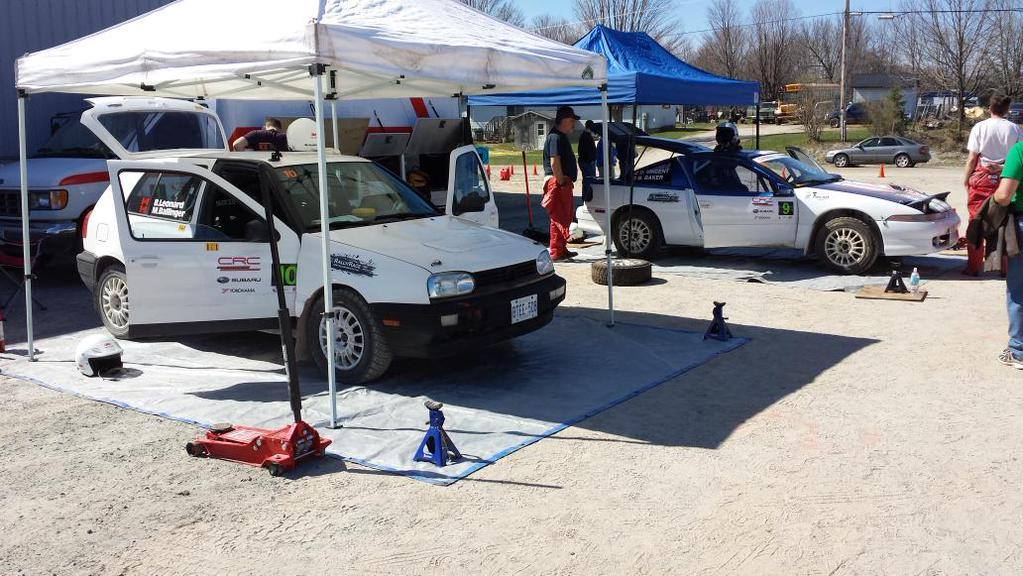 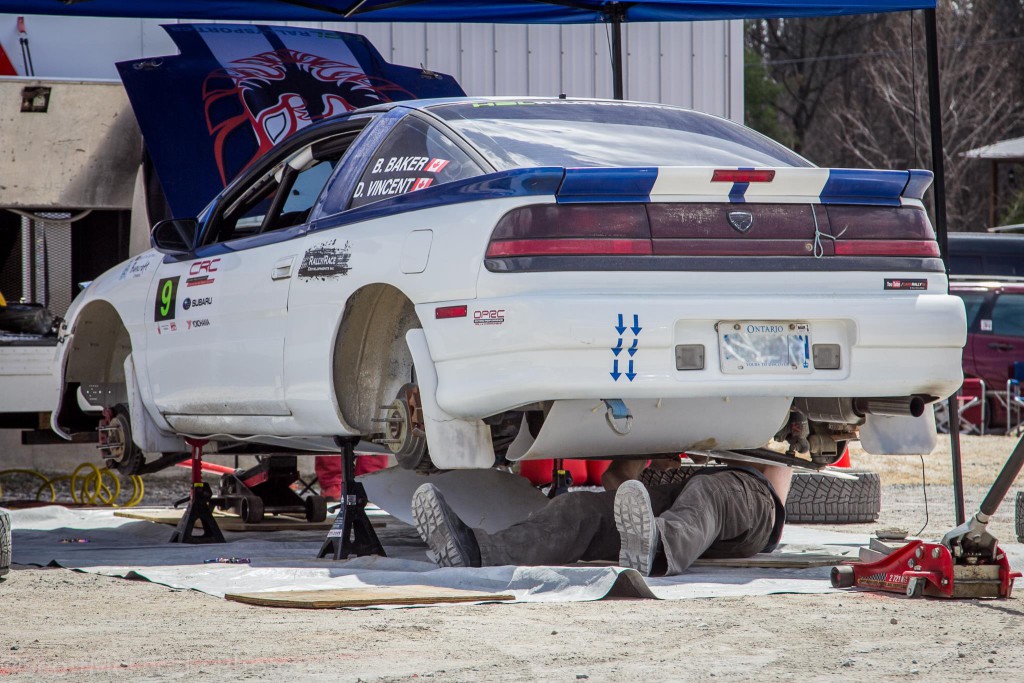 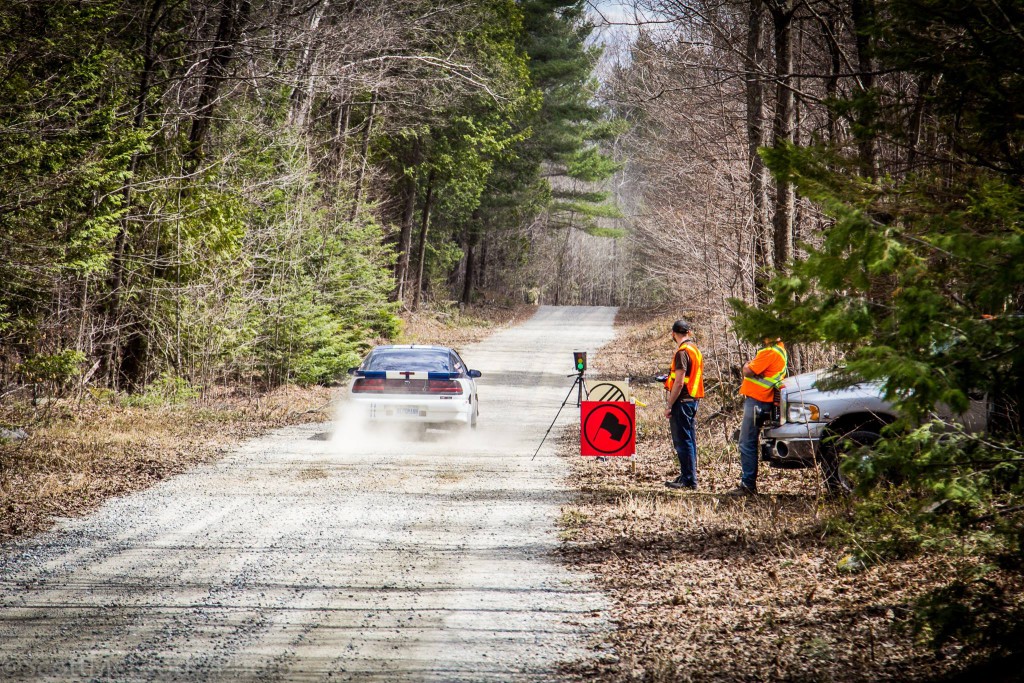 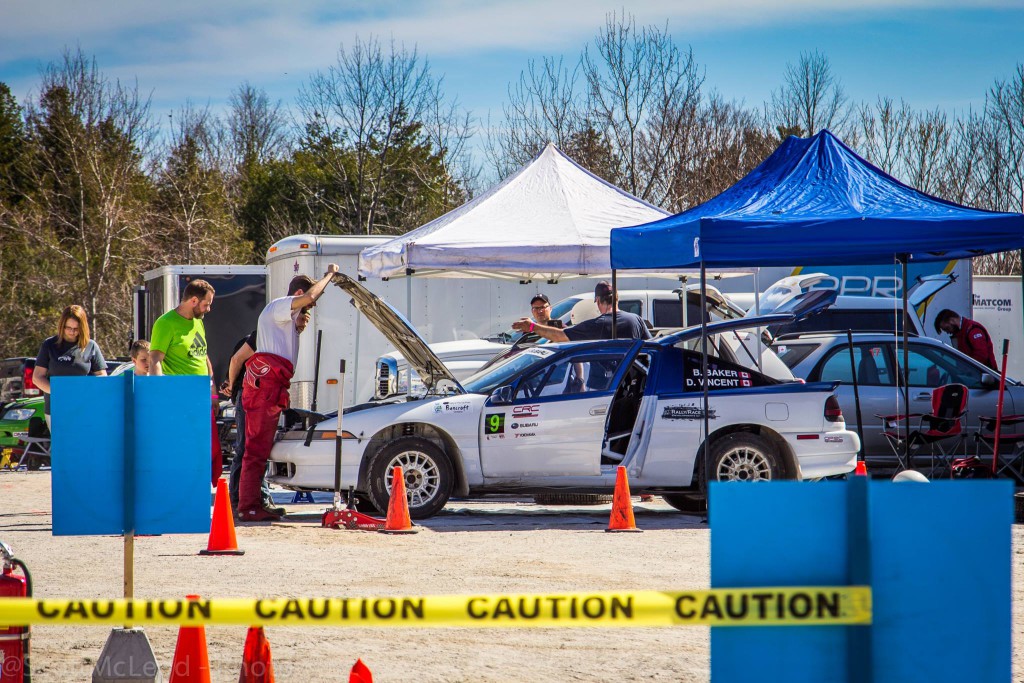 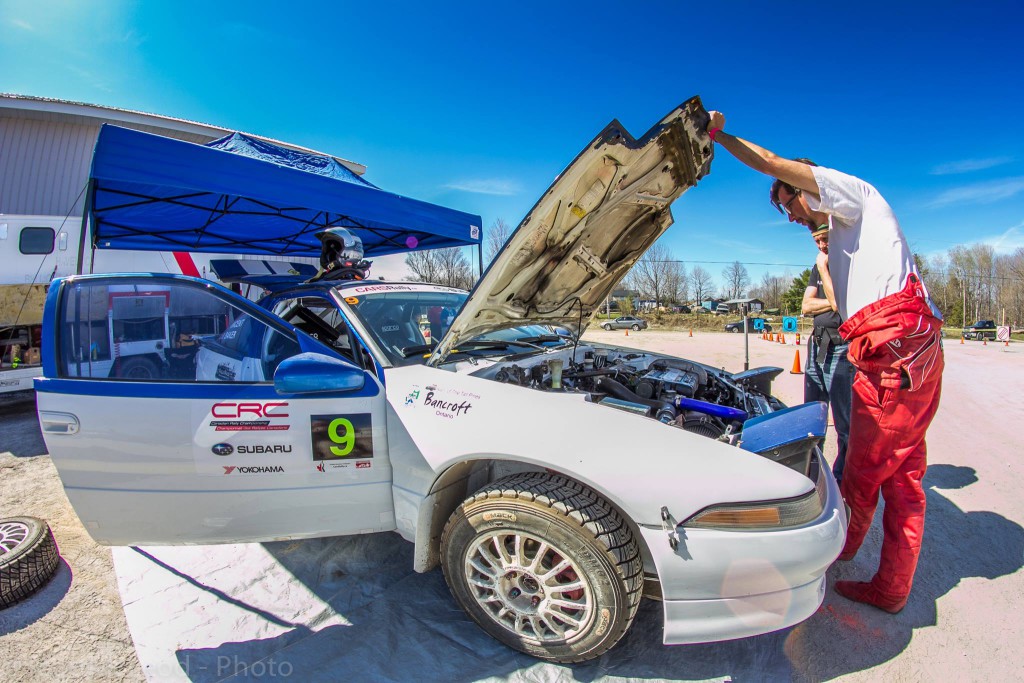 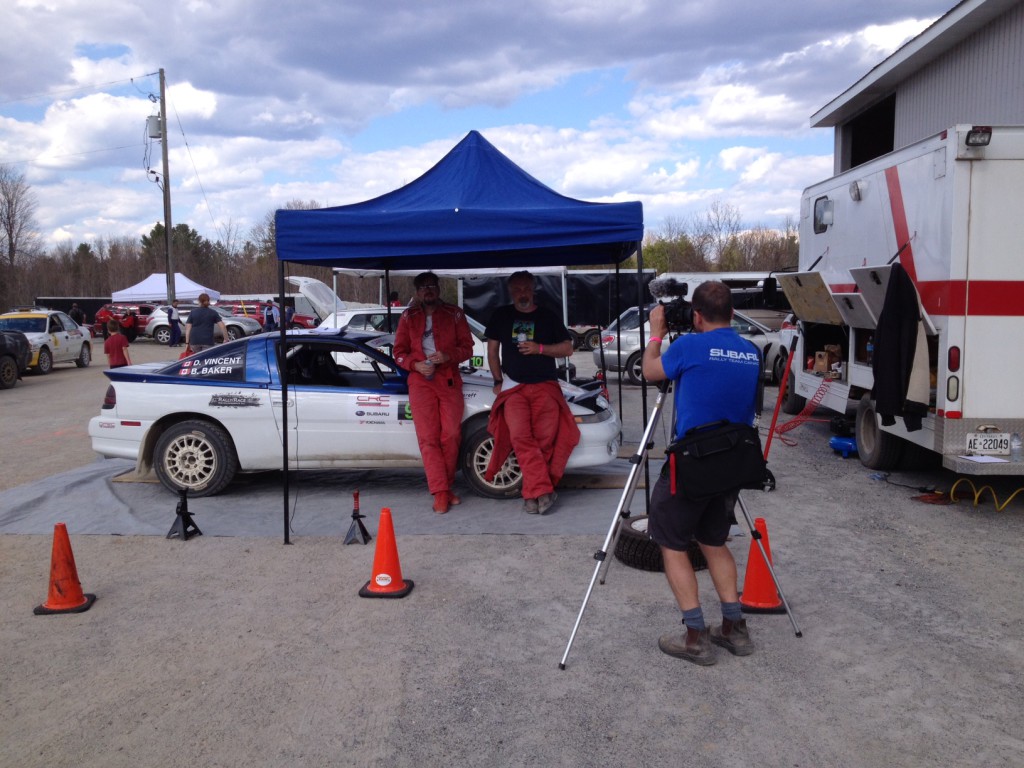 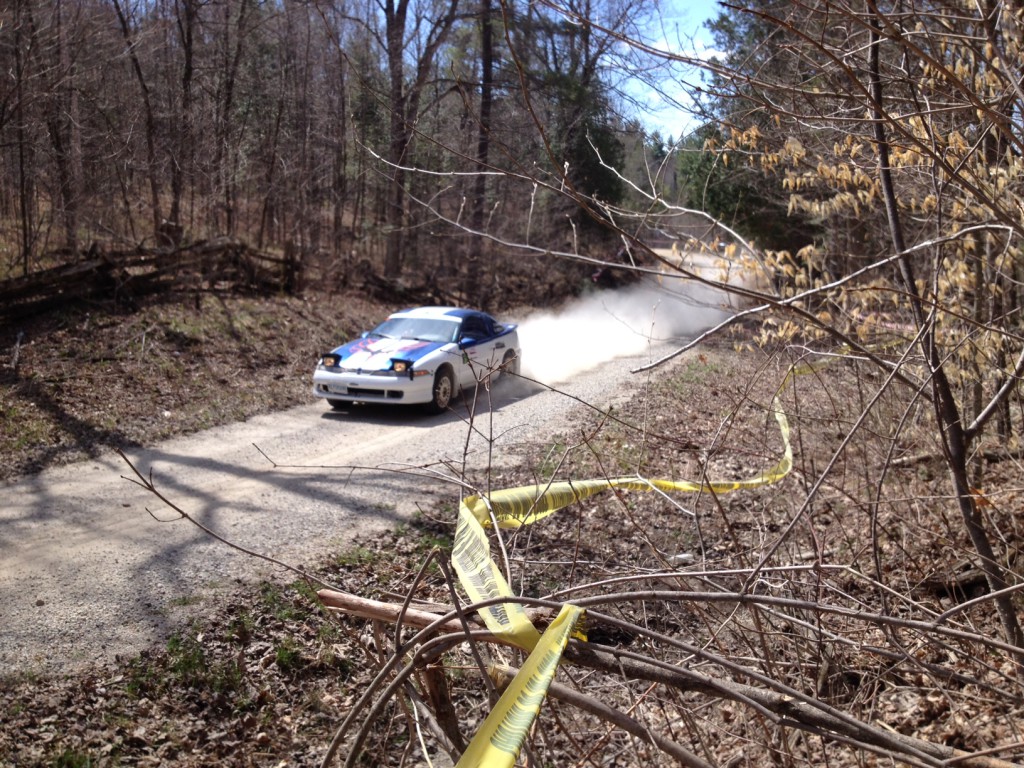